What Inspired India to move towards EVs 2021 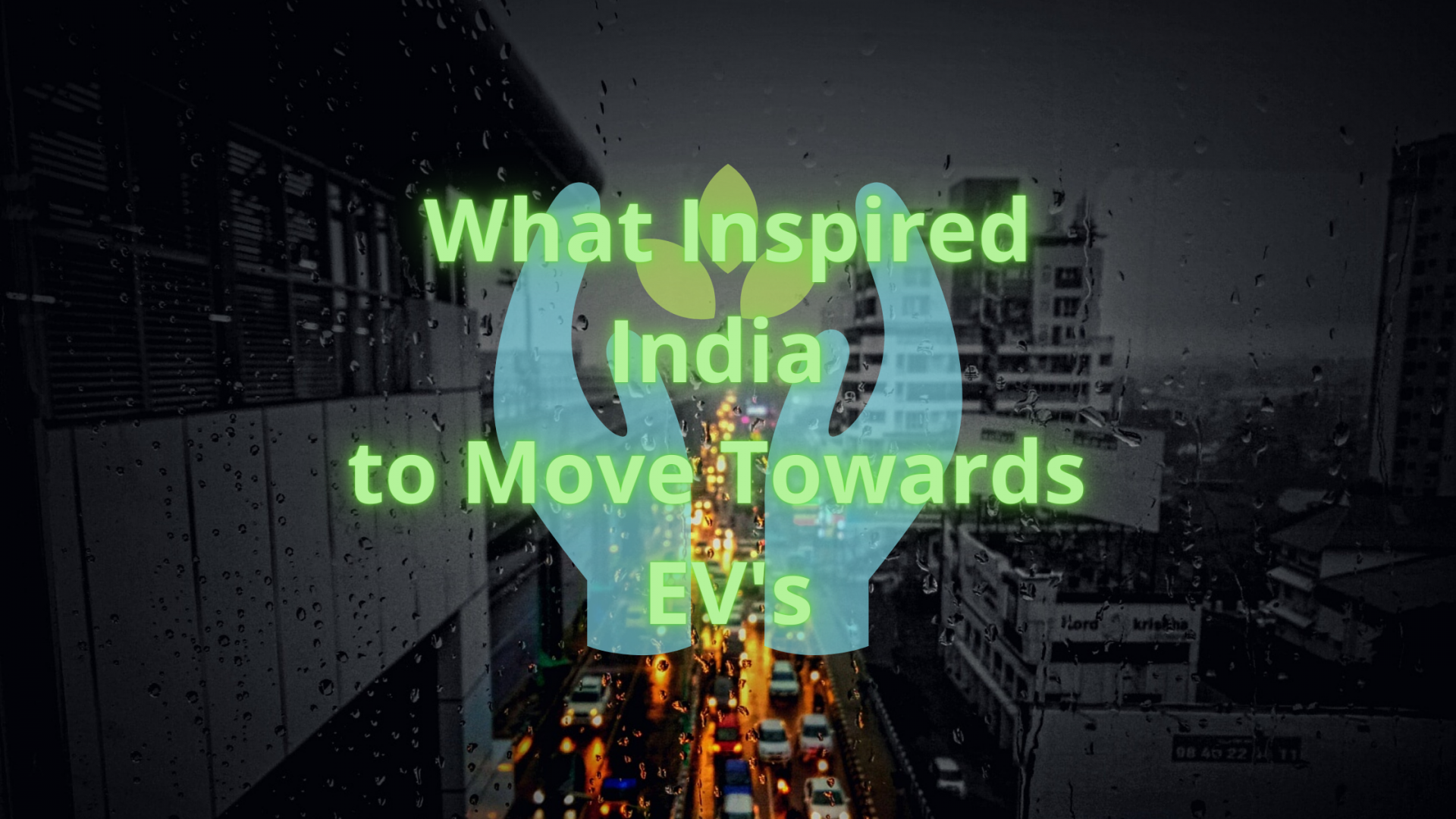 Electric Vehicles (EVs) are the future. Lots of countries are moving towards electric vehicles, it was only a matter of time before India followed. The reason, benefits of moving to EVs over conventional vehicles are nothing to snark at.

The country’s Transport Minister, Nitin Gadkari vowed to move to 100% electric cars by 2030, which seemed too steep a goal. Later he and the Bhartiya Janata Party-led government reduced it to 30%. While the reduced target may seem like a letdown, but when compared against the huge automobile industry of India, this change has been welcomed with open arms.

So what actually inspired India to move toward EVs?

Though it’s not as simple as you might think, India actually has its heart in the right place here. With growing dependence on importing fuel, higher pollution levels in the country and in a bid to reduce their overall green-house emissions, India opted to shift into electric vehicles back in 2015 under the FAME scheme or the Faster Adoption and Manufacturing of Hybrid and Electric Vehicles scheme.

Let me take you through the primary reasons as to what inspired India to opt for a greener future with EVs.

What Inspired India to move towards EVs

India like many other countries of the world have been fighting tirelessly to put an end to pollution by adopting greener measures that can ensure the safety of their citizens.

Being considered a polluted country, the people of India have slowly begun to understand that the only way out is via sustainable energy production and by using Eco-friendly means of transportation such as Electric Vehicles.

India has a few important goals that it wants to achieve with the shift to EVs:

Let us take a look at how these factors have been able to inspire India to transition to EVs:

This is probably the most clear-cut advantage and the reason for going green in the automobile industry for any country right now. The reduction in pollution moving to EVs from conventional vehicles cannot be ignored.

Electric vehicles emit zero greenhouse gases while running. This reduces air pollution and in turn there’s a reduction in global green-house emissions. They also aid in reducing noise pollution, gasoline engines create a lot of noise during the combustion of fuel. Electric vehicles run almost silently. This is can help improve mental health too by reducing stress.

India has some of the most polluted cities in the world. These are directly in relation to the number of vehicles running in the cities.

Using less of electric vehicles means using less of fuel used to power them. Not all of the fuel used in vehicles are obtained internally and so to meet demands, fuel is imported into the country. This increases cost and dependency on supply. Everyone loves to be independent and the fact that using EVs could help in that aspect only makes India adopt Electric vehicles sooner.

Electric vehicles don’t need fuel and this helps in reducing oil imports. Almost 80% of the oil used in India is imported. A large chunk of this used in the transport industry. Reducing oil imports benefits the country financially. And one would be mad to let this opportunity slip away.

Oil imports are a considerable expenditure and this will help the economy more. For example, a report from eia (Environment Impact Assessment) had stated that as of 2015 India had a 75% net import dependence which meant that at that time India used to import at least 75% of it’s oil and petroleum from other countries.

FICCI and Rocky Mountain Institute published a report titled ‘Enabling India’s Transition to Electric Mobility’. It states that moving to electric vehicles in the passenger sector could save $300 billion for the country.

Electric vehicles are only as clean as their source of energy used in production and to run them. Using clean energy sources contributes very little to pollution and greenhouse emissions. But if they are produced or use electricity from burning fossil fuels to run, they can have a worse impact than gasoline cars. This is because producing an electric vehicle requires more energy, on average 15-68% more.

India could potentially be the biggest EV market and this is positive for the industry. India should learn from Countries like Norway and Sweden. Electric vehicles take up 49.1% of the total annual vehicle sales in Norway. The reason for such an effective transition is the role of their government. Government money was used to kick-start charging stations. The government also invested in financial incentives for taking part in the movement. Private companies are now in the game and taking over operations.

India has pledged certain goals under the Paris agreement for sustainable energy development. These are:

We all are in the fight against climate change. For someone who might have missed it, climate change is the fast-deteriorating climate conditions of our planet.

The reason being almost all our activities cause damage to the environment. How? The energy that we produce for our daily activities is at the expense of burning fossil fuels (mostly) and this causes emissions. The emissions are greenhouse gases which trap heat in the atmosphere increasing the temperature of our planet. This can have very adverse effects on the climate. The reason it is referred to as the climate change.

There is a phased plan in place to have manufacturing units and plants comply with green norms by 2022.

This is a fight not only for India, but for all of us, sure we can’t stop it completely because we live for the comfort of our bodies but emissions can reduce if we are smart about it and want to work toward a better future. One of the worst contributors to this problem is the use of vehicles.

Rightly so, India is starting to shift to electric vehicles because they have a lower carbon footprint than conventional combustion-engine cars.

India has pledged to reduce per capita emissions based on GDP by 33-35% of 2005 by 2030. In 2014, when India was the fourth-largest contributor to greenhouse emissions, there was no data released. Moving to EVs is part of the answer in reducing these emissions.

In some rare cases, electric cars be a worse contributor to climate change (Poland). But when done right, electric vehicles can be extremely beneficial towards the fight against Climate change.

This is also a driving factor for India and it should be the same with all countries as well.

We are in this fight because we are the cause. And the move to electric vehicles is a start. India and other countries making the move are smart and doing the right thing because they are inevitably the future.

The move towards EVs has already started but the road is long and a lot of challenges are poised. Everything from the vehicles to cleaner energy production will take time and money and infrastructure. But this is a no brainer for any country in the next few years, moving to electric cars are vital for the environment. Places like India following suit is the right example for other countries.

India is following Norway’s footsteps with the Indian government kick-starting the shift and this is the way to move forward. The players in the market now have to work towards the transition and should make sure all this pans out well. Only the future will tell what happens, India’s heart seems to be at the right place. All that’s left is to put in the effort and investment to make the dream of green cars come true.

The positives surrounding going full EVs is the driving factor for this change. The benefits too huge to be ignored. The reduction in pollution alone is a good enough reason to go electric. But coupled with that, India can gain a lot financially from reducing oil imports. Going full green is also an initiative to produce electricity from green and clean sources. All these advantages help this change a no brainer and it’s the right thing to do.